Bair’s | A Brief Look Back

For Christmas 1992 I gave my husband Andy some fly-tying equipment. After the holidays, he decided he needed more feathers and made a trip to The Fish Hawk fly shop, in Atlanta, Georgia, to fill his pockets. There, in the parking lot, he met Stan Clarke, who owned a house on an island in the Bahamas. After some time talking, Andy decided he wanted to try flyfishing for bones. So in February 1993, we booked tickets and ventured to South Andros.

Following that trip, Andy was hooked. And during our next visit, we stopped to see Stan Clarke’s property near Congo Town. The house was in rough shape. And Clarke indicated he was interested in parting with it. So we talked it over and decided that if we could sell our house and business we’d make the leap and build a bonefishing lodge.

In two months everything had sold, and by April 1994 we were headed toward a new adventure.

Todd Pritchett was the architect who helped us transform the original house into something special. We hired local contractors and watched them mix concrete by hand into five-gallon buckets, passing the buckets to each other in lines. When the majority of the new house had been completed, we painted it pink with white trim. Of course, in the Bahamas, paint quickly fades in the sun and salt. Within a year it needed painting again. So this time we chose a darker pink. The color was called bubblegum. Bair’s remains pink to this day. 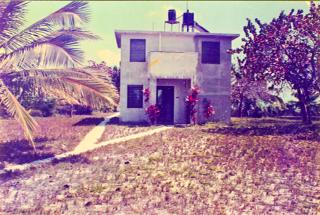 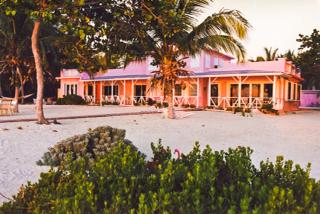 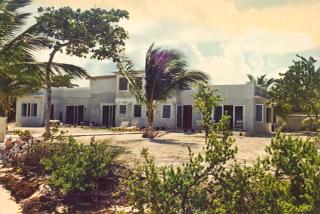 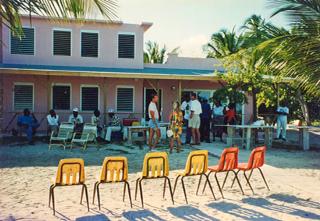 In May of 1995, we received our work permits. Within a year the lodge was booked solid. We were fortunate to have met so many delightful people during our nine-year run and still stay in touch with many of them. Fifty percent of our guests brought their wives, who also fished. I even caught my share of bonefish from in front of the house.

After I was diagnosed with cancer, the twin towers fell and we started thinking of coming home. But what to do with the lodge?

In the early 2000s I was looking at the Bahamas, as long-time clients had expressed interest in seeing us develop a Nervous Waters property in the country. That’s how we grew, and it proved to be a great recipe because these regulars often brought new friends to each lodge we opened.

With the help of angling legends Carter Andrews and Sebastian Casado, both in the industry now for more than two decades, we rented a small plane and started a thirty-day scouting trip through the Bahamas. Bair’s happened to be our last stop.

When we landed at Congo Town and drove to the remote lodge, I knew it was the one.

The location was perfect; facing the ocean, but between Deep and Little creeks with a direct connection to the west. The lodge held six guests then and it was half the size it is today. But the look and feel was ideal, and both Stanley and Andy where superb hosts.

Negotiations took place the night we arrived. I sat with Stanley for hours and she kept pulling extremely tidy paperwork from under her big bed in the managers’ quarters. We closed quickly and over the next years we upgraded the furniture, boats, and equipment. We also added a second floor and renovated the kitchen and bar.

In 2008 we partnered with Oliver White; an enthusiastic fly fishing personality that had guided at Rio Grande’s Kau Tapen Lodge some years earlier, and who was fresh out of a New York hedge fund career and ready for a change. Oliver was also in charge of the Abaco Lodge start up, our sister lodge based out of Great Abaco Island; another must for Bahamas bound fly anglers.

We kept the bubblegum pink color and the “Bair’s” name as tributes to Stanley and Andy, pioneers of the finest lodge in the Bahamas, and as a thank you for letting us be a part of it.